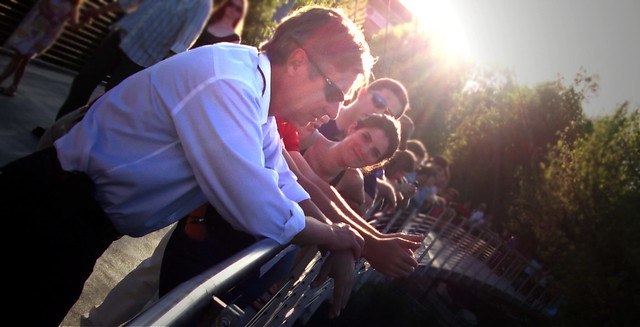 The 2016 Presidential election is in full swing and already the voters in the United States are dismayed by the options that they currently have in the Republican and Democratic Party’s.  Anyone one who has ever voted for a third party before has heard the common statements, “You are just wasting your vote!”, “At least vote for the lesser of two evils!”

NBC News just ran an article today concerning their most recent poll, and the American people are calling out for a third option.

Well there is another option out there and it’s the Libertarian Party!

Currently the Libertarian Party is on track to have 50 state ballot access and a list of candidates that are seeking its nomination for President.  However, there is a clear front runner, and his name is Gary Johnson.

Gary Johnson is the former Republican Governor of New Mexico.  He was elected in a state that was 2-1 Democrat, and after vetoing over 700 pieces of legislation as Governor, he was re-elected by a bigger margin.  He reduced the size of government in New Mexico and left it in one of its best economic positions in the state’s history.

Johnson is also a world class athlete who has climb the highest mountain on every continent in the world.  He is an avid gas balloonist and he is also running for President of the United States.

I had the privilege to ask the Governor a few questions about his candidacy for President and we would like to provide you with that interview below.

This interview was conducted by email, and these are the responses that  I got back from the Governor.

1. What makes you a better option than the Republican front-runner Donald Trump and the Democratic front-runner Hillary Clinton?
Donald Trump and Hillary Clinton are two of the most polarizing figures in modern election history. They have achieved their respective ‘frontrunner’ status by appealing to distinct minorities of the electorate, albeit very different minorities. Hillary Clinton is the definition of the Establishment in what is a clearly anti-Establishment election, and Donald Trump has staked out positions so extreme that a full one-third of Republicans are telling pollsters they can never vote for him.
In contrast, I was elected and reelected in a 2-1 Democratic state, governed with a common sense approach that reflected the basic libertarian notions of less government and more freedom. I am more convinced than ever that the real majority in America is looking for that approach. Less government, less debt, and greater freedom from the overreach of politicians who want to control their lives, their businesses, their families and their checkbooks.
If and when Americans have the opportunity to see that there is a common sense, rational alternative to the Republican and Democratic nominees, it will be a game-changer.
2. As Governor, you were the highest elected official that called for the legalization of marijuana and you still hold that title.  Do you think this position could possibly hurt you in a general election?
The Gallup organization has been asking the ‘legalization’ question nationally for a couple of decades now. In the past few years, support for legalizing marijuana has risen to more than 50%. In other words, it is an issue where the American people are far ahead of the politicians, and when you look at the issue objectively, that is not surprising. An estimated 140 million Americans have used marijuana at some point in their lives, and the vast majority of those Americans don’t consider themselves to be criminals. That’s why the voters in a growing number of states are bypassing their legislatures and legalizing marijuana, and why I am confident that a presidential candidate who supports legalization is, in fact, on the side of the majority of voters.
3. One of the biggest topics in the Libertarian Party is the belief in the non-aggression principle.  One of your rivals for the Libertarian nomination has been criticized for attacking the NAP.  Do you think the non-aggression principle hurts the party’s ability to attract a mass following of voters in this country?
With all due respect to the tens of thousands of pages of theoretical debate about the NAP, it is actually pretty straightforward, and I believe consistent with the beliefs of most  Americans.
The initiation of force, whether military, government or personal, against another person or that person’s property is wrong. That applies whether it is physical violence, theft or coercion to force an individual to act against his or her wishes or best interests.
The NAP is NOT pacifism. It is not anarchy. When combined with a dose of common sense and real-world governance, it is a fundamental principle that works. As the Libertarian Party and most rational thinkers make clear, the NAP in no way rules out the use of force or even violence in defense of one’s life or property. And it in no way rules out justified actions by the government to protect life, liberty and property.
As Governor, for example, I used the power of government to crack down on bad actors who were polluting our water and air. Pollution IS aggression, as defined by the NAP. And defending against that aggression — when individuals and property owners could not do so themselves — was and is an appropriate use of government force. Using that same government force to simply alter people’s behavior or make them drive different cars or buy different light bulbs is wrong. THAT is aggression.
The theory of the NAP is complicated and the subject of mind-numbing debates. The practice of NAP is actually rather simple.
4.  What would it look like if you, a Libertarian, were sitting in the oval office next year, and Congress is still controlled by the Republicans and Democrats?
When I was elected Governor of New Mexico, the legislature was controlled by a substantial Democrat majority. Needless to say, they weren’t thrilled by my pledge to cut the size and cost of the government. My approach was pretty simple: I vetoed roughly 200 of their bills in my first few months — and hundreds more line-items. The legislature was outraged. The media had a field day, and I rather quickly gained the nickname “Governor Veto”.
But a funny thing happened. Once the legislature realized that I was serious about making them justify every penny they wanted to spend, they started being more careful about what they passed, and while I kept vetoing bills, there were actually fewer bills that I needed to veto. I guess you could say we came to something of an understanding. The result was a government with 1,000 fewer employees, a budget surplus, and significant tax cuts over the course of the eight years I was Governor.
As President, I would do the same thing. To begin with, I would send Congress a balanced budget and put the burden on them to justify to the American people the deficit spending that has become routine. Likewise, I would veto any legislation that would require spending money we don’t have. They might override, and they might not balance the budget overnight, but I would change the conversation. Instead of nibbling around the edges of the federal budget with debates over how big the deficit should be, we would be having a real debate about whether there should be any deficit at all.
I believe the result of that debate would be less government, less spending, and a degree of accountability in Washington that has been sorely missing for far too long.
5. Sum up your platform for President in less than two sentences.
Less government, less war, and more freedom.

I would like to thank the Governor for taking the time to answer my questions and providing the American people with his vision for our country. He is a busy man and took the time to shed light on important issues and how he will advance the Libertarian movement in the United States.

I encourage you to check out his website to learn more about Gary Johnson and his candidacy for the Libertarian Party.

I also encourage everyone to visit the Libertarian Party website to learn more about their platform and ways to become a member of this growing political party.